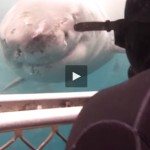 When you go great white cage diving, you always want to get a close shot of the feature attraction. But sometimes, they get so close that you wonder if maybe the opening of the cage is just a wee bit too big. This looks to be one of those occasions.

This cage diver enjoyed a super-sized closeup during a cage dive off the Neptune Islands in South Australia. He was out with Rodney Fox Adventures and states the entire experience was a “ball.” Although the video was just released today it was shot in February 2014.

The video was posted by Philip Stubbs and is a very short 34 seconds in length. The great white makes her appearance through a wall of fish starting at the 20 second mark.