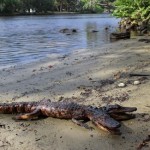 Over the weekend, Justin Arnold from Seminole Heights, Florida posted a picture of a two-headed alligator he claims to have seen while walking his dog. Though the picture has been shared thousands of times, some have expressed concern that the picture isn’t exactly what it claims to be.

Axial bifurcation is caused when monozygotic twins fail to separate completely. This results in polycephaly, having more than one head. While two-headed reptiles aren’t completely unheard of, it is rare that they would survive for any length of time without human intervention and care. Even then, survival isn’t guaranteed.

We introduced you to Medusa (see image below) a two-headed snake, back in April. Her feedings have to be carefully orchestrated, due to competition from one head to the next. Despite the fact that both heads didn’t really need to eat due to a shared digestive system, if both heads weren’t fed simultaneously, one would attack the other.

This inability focus on feeding is just one reason that polycephalic animals don’t fare very well in the wild. One body controlled by two independent brains also leads to animals that generally don’t move very well, which would be particularly problematic when trying to evade predators.

On Facebook, Arnold stated that this animal had been reported by several people to the Florida Fish and Wildlife Conservation Commission (FWC), who gave a brief explanation for the cause of the condition. However, the FWC told a local Fox affiliate that they were skeptical of the photograph, though Patch reports that two trappers were sent to investigate.

The photograph has drawn in a fair amount of skepticism from commenters, as there are no tracks in the sand coming out from the water and the right limbs are hovering above the sand. While some are calling it a work of Photoshop, others suspect it may have been the product of creative taxidermy.

The biggest clue that this is alligator is likely a hoax is considering the source itself. Arnold also runs a blog on Tumblr dedicated to bizarre items being passed off as real items. One specimen includes a “very rare” trout sporting a thick fur coat, allegedly caught in Lake Michigan in the 1960s. The plaque reads: “It is believed that the great depth and extreme penetrating coldness of the water in which these fish live has caused them to grow their dense coat of fur.” As a Michigan native, I can attest that things get cold, but never so cold that fish defy evolution and begin looking like the lovechild of a trout and a Yeti.

Here are some photos of some actual two-headed animals: