The science behind double tornadoes 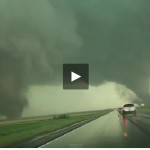 Twin tornadoes can mow down small towns in minutes, and although unusual they can develop in several ways.

Most tornadoes, either single or double, are associated with supercell thunderstorms, which have a large, vertical column of rotating air. When wind blows in different directions and at varying speeds, supercells tend to form tornadoes.
This is where it gets tricky. Jane J. Lee has done some really cool research over at National Geographic, and here are some of the highlights:

When there is a tornado outbreak, separate supercells spawn multiple tornadoes. But twin tornadoes are different, as they are born from a single parent supercell.
This can happen in three different ways. The first one, meteorologist Greg Carbin told National Geographic, occurs when “a new tornado spins up before an old one dies out” and there is a momentary overlap in which two tornadoes from the same supercell are active. This process is known as occlusion, and it is very likely that this was the case of the killer tornadoes that struck Pilger, Nebraska, on Monday the 16th of June, 2014. Karen Kosiba, a researcher with the Center for Severe Weather Research in Colorado, told Mashable that the Pilger tornadoes “were probably a cyclic evolution, where one tornado dissipates as another strengthens”.
The second possibility is the formation of a ‘satellite’ tornado in the periphery of a primary one, where a new twister orbits its big brother.
The third way in which a twin tornado can be formed is during a very violent storm where, according to Carbin, “There’s so much turbulence and rotation going on within a tornado itself that it spins off smaller-scale vortices that are very intense”.
Although researchers are working hard to understand tornadoes through computer modelling and satellite observation, these natural phenomena are still mysterious and unpredictable.
Twin tornadoes hit every 10 to 15 years. The last one on record destroyed much of Oklahoma City in 1999.