Newly-discovered active volcano could erupt underneath ice in Antarctica and add to effects of global warming, say scientists 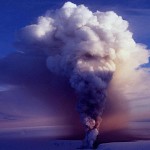 A newly-discovered active volcano could erupt underneath Antarctica, melting the ice from below and compounding the effects of global warming, according to scientists.
Researchers discovered the volcano underneath the ice after setting up devices to measure tectonic activity across Marie Byrd Land in the west of the continent.
Scientists had intended to use the seismograph machines to help in their efforts to weight the ice sheet – only to find that a volcano was in fact forming underneath the ice. Discovery: A newly-discovered active volcano could erupt underneath Antarctica, melting the ice from below Even a sub-glacial eruption would still be able to melt ice, creating huge amounts of water which could flow beneath the ice and towards the sea – hastening the flow of the overlying ice and potentially speed up the rate of ice sheet loss.
‘Numerous volcanoes exist in Marie Byrd Land, a highland region of West Antarctica,’ said Amanda Lough, of Washington University in St Louis in the team’s paper on the subject, published in the Nature Geoscience journal. Findings: Volcanic activity was discovered around 30 miles from Antarctica’s highest volcano, Mount Sidley
‘High heat flow through the crust in this region may influence the stability of the West Antarctic Ice Sheet.’
The Antarctic ice sheet is one of the Earth’s two polar ice caps and covers an area of 5.4 million square miles – around 98 percent of the continent, making it the largest single mass of ice on earth.
Although scientists have suggested that sea ice around the continent is increasing, land ice appears to be decreasing and the area is very sensitive to global warming.
Seismologists had set up two crossing lines of seismographs across Marie Byrd Land in 2010 – the first time such instruments able to withstand the cold temperatures year-round had been used.

They had hoped that discovering the weight of the ice would help them to work out the history of Antarctica’s climate, but to do this needed to know how the Earth’s mantle might respond to such a large mass of ice.
Software that might detect anything unusual beneath the ice surface was deployed, and in January 2010 and March 2011 this recorded two bursts of seismic activity.
When the scientists looked into what might have caused this activity they discovered what they believe to be a new volcano, forming around half a mile below the ice.
Ms Lough added: ‘Eruptions at this site are unlikely to penetrate the 1.2 to 2-km-thick overlying ice, but would generate large volumes of melt water that could significantly affect ice stream flow.’