Melting glaciers will destroy our planet 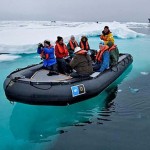 Melting glaciers will destroy our planet
5055 5
According to research scientists from NASA and the University of California, due to the melting of Antarctic glaciers global sea level rise in the foreseeable future to a critical level, which will lead to a large-scale disaster on the planet.
Due to global warming and the ozone hole over Antarctica in the western part of the Antarctic ice sheet melting an irreversible process. This in turn leads to an overall increase in water temperature in the region, resulting in sea level rise in the next century by about 4.5 meters. Previous predictions about the consequences of melting glaciers were more positive: it was thought that this process will take at least Goals . However, a recent study strongly reduced this period: until about two centuries. Experts NASA and the University of California conducted scientific work over the last 40 years, using the results of the study of glaciers, as well as data obtained from aircraft and satellites. Although the melting process has only just begun – it is irreversible. According to Eric Rignota of NASA, the glaciers in the area of the Amundsen Sea in West Antarctica has “passed the point of no return.” Water level rise poses a great threat to many countries. Only in the U.S. may be affected about 5 million people. According to some projections, the water will be 73% Miami 22% of New York and 20% in Los Angeles.