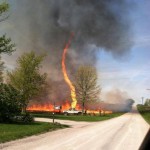 As if tornados aren’t bad enough on their own, sometimes air can swirl around and make a whirlwind that has considerable amounts of water (waterspout), dirt (dust devils), or even fire (fire whirl). No sharks, however. Sharknadoes are definitely not a real thing. But who needs that when there are literally cyclones made out of FIRE?!

Fire whirls aren’t associated with thunderstorms and aren’t as strong as traditional tornadoes (can we all just pause for a moment to be thankful for that?). They aren’t really considered rare, but they typically happen around wildfires. The core of the whirlwind is actually the part that is on fire, and a ring of air around the core fuels the flames with fresh oxygen. The core of the fire whirl is typically 1-3 feet (0.3-0.9 meters) in diameter, though there have been reports of some about ten times that size.

Fire whirls can be as deadly as they sound. In 1923, Japan got hit with an earthquake that measured 8.2 on the Richter scale, causing a 40-foot-(12-meter-) tall tsunami to hit just minutes later. Adding insult to injury, the high speed winds created a massive fire whirl that claimed the lives of 44,000 people who had tried to find refuge elsewhere away from the shore.

Shawn Reynolds, who works for The Weather Channel, shared a picture on Twitter that had been submitted over the weekend. The picture is assumed to be legitimate and reportedly was taken by a man driving down the road as a farmer was doing a controlled burn on his field. (If you’re curious, controlled burning revitalizes the soil while clearing crops from the previous year.)