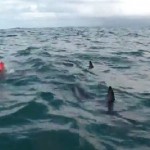 British swimmer, Adam Walker had enough to worry about as he took on the freezing ocean in a grueling eight hour and 36 minute swim across the Cook Strait on Tuesday.
But he had his mind taken off the extreme temperature when he noticed a two metre shark-shaped figure swimming beneath him in the New Zealand waters.
Luckily enough, the shark never attempted an attack as a pod of dolphins soon came to his side, swimming alongside Mr Walker for an hour while he crossed the strait.
Scroll down for video

It was a magical sight for those watching, as Mr Walker’s long strokes were matched by the jumping figures of approximately 10 dolphins, who came so close to the swimmer that he brushed a tail as he swam.

Whether they simply wanted to join in the fun or were actually actively participating in protecting Mr Walker from a possible shark attack is unclear, but the swimmer is grateful non-the-less.
‘It would be a nice thought they were thinking, we will just help our pal get through,’ Mr Walker told a New Zealand website.
Mr Walker was partaking in his sixth swim as part of the Ocean’s Seven challenge in which participants attempt to swim what are considered the seven hardest long-oceans around the world, while raising money for the Whale and Dolphin Conservation Society.
The athlete later added the following comment to his Facebook page after completing the swim: ‘Yesterday I swam the 6th of the ‘oceans seven’ swims ‘Cook Strait’ in 8 hours 36 mins. But that doesn’t tell the whole story rolling waves, big currents but more important than that a dream come true swimming with dolphins over an hour!!
‘I’d like to think they were protecting me and guiding me home!!! This swim will stay with me forever,’ he wrote.

Mr Walker prepping for his sixth swim as part of the Ocean Sevens challenge in Oriental Bay, Wellington The British swimmer said he saw a two-metre beast swimming beneath him before the pod of 10 dolphins joined him
Despite being told not to worry about sharks by legendary New Zealand swimmer Philip Rush, who mentored Mr Walker before his swim and having crossed the strait eight times himself, Mr Walker confirmed he ‘had a go at him’ once he’d finished his swim.
But it’s not the first time that dolphins, who often attack sharks in order to protect themselves and their young, have beenreported to ‘save’ humans from an impending shark attack.
In 2004, a group of four swimmers were protected from a three metre great white shark by a pod of dolphins which encircled the group just off of a New Zealand beach.
Rob Howes, a British-born lifeguard, who was saved by the dolphins after having gone for a swim with his daughter, Niccy and her two friends, told the New Zealand Press Association that the dolphins upheld their position for a full 40 minutes.

Getting very close: Mr Walker said the dolphin’s came close enough to brush his feet with their tails while he swam the Cook Strait Mr Walker faced freezing water, roilling waves and big currents on the sixteen nautical mile stretch, starting off from Wellington and finishing at Perano Head
‘They started to herd us up, they pushed all four of us together by doing tight circles around us,’ Mr Howes said.
‘It [the shark] was only about two metres away from me, the water was crystal clear and it was as clear as the nose on my face,’ he said before adding about the dolphins: ‘They had corralled us up to protect us.’
However Mr Walker faced more difficulties than just sharks during the sixteen nautical mile stretch along the Cook Strait, which he started from Wellington and finished off at Perano Head.
The swimmer was overcome with motion sickness in the choppy waters of which he said: ‘It was like swimming in a washing machine.’