World Tiger Population Has Grown by 40% Since 2015, Conservation Group Finds 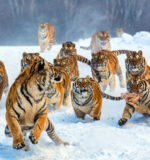 Published right before International Tiger Day (in the Year of the Tiger), a surprise report from the International Union for Conservation of Nature (IUCN) estimates that the population of tigers has increased by 40% since 2015, and is now anywhere between 3,726 to 5,578 worldwide. This means that there are more tigers than we previously knew about – a result of monitoring improvements. According to the IUCN, this also shows that the global tiger population “appears to be stable or increasing.” This is definitely good news that may give cause for some hope, but there are some caveats. The conservation efforts of local governments where the big cats live are indeed to be hailed as important, but “this progress is fragile—we are still losing tigers from many areas, while they are increasing in others,” Wildlife Conservation Society Tiger Program coordinator Dale Miquelle said.

Tigers are still categorized as “Endangered” on the IUCN Red List, a list that monitors the global conservation status of thousands of species. So there is much work to be done, even though the results are indeed promising, Miquelle admits.

Poaching and habitat fragmentation are still prevalent, posing major threats to these animals. According to the World Wildlife Foundation (WWF), a staggering 95% of their historical range has been lost due to human activities. And when tigers lose their habitat, they are forced to leave and find resources elsewhere. In practice, this often means that they have to compete for those resources with humans, resulting in loss of life on both sides. Poaching makes this situation even much worse.

“Major threats include poaching of tigers, poaching and hunting of their prey, and habitat fragmentation and destruction due to the growing pressures of agriculture and human settlement,” IUCN’s statement reads. “Expanding and connecting protected areas, ensuring they are effectively managed, and working with local communities living in and around tiger habitats, are critical to protect the species.”

Miquelle agrees, concluding that “although we still have a very long way to go, the new assessment shows that the tiger can be saved.” But to do that, we first have to change our own ways.