Woman Was Sitting on Her Kayak in a Bay When.. wow holy crap….. 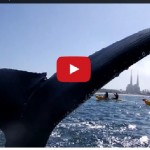 While kayaking in Monterey Bay and watching a huge raft of sea lions that had come up right in front of these kayakers , a bus-sized humpback whale suddenly rose up out of the water only 10 feet from one of their boats. It was making a b-line toward the boat. Humpbacks are graceful and fully aware of their size and of their surroundings, so the kayaker wasn’t scared (at first) but was certainly shocked that it chose to swim right up to her. It dove under her kayak, which was amazing and exhilarating! But then its back arched and came to the surface about 3 inches from her boat, which freaked her out a bit. She wondered: hmmm, maybe this one needs contact lenses? Then its enormous barnacle-encrusted tail came out of the water and was about 12 inches from her face, which pretty much made her eyes pop out of her head. (that’s why she swore 😉 – She was rather stunned!

About a minute later, another whale came up and dove down right next to other kayakers. It was truly unbelievable!