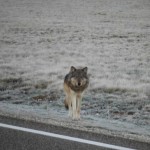 photo credit: Courtesy of the Center for Biological Diversity. A wolf has been spotted in the Grand Canyon National Park, more than a 1000km from the most likely breeding colony

For the first time in 70 years the Grand Canyon has gray wolves. Or at least a wolf. The announcement may be a harbinger of the return of the species to territory from which they were eliminated decades ago, bringing with it the same ecological benefits wolves have provided elsewhere.

Gray wolves were once the apex predators across most of the United States. However, a combination of their attacks on livestock, and exaggerated accounts of threats to humans led to a campaign that saw them wiped out in the lower 48 outside two small patches, one ironically outside their native range.

A rise in environmental awareness led to reintroduction programs in the Great Lakes and northern Rocky Mountains. These have brought benefits far beyond expectations, not only reducing elk populations, but moving herbivore locations back to places where they do less damage to vegetation.

Some Mexican wolves have been introduced to Arizona and New Mexico, but a wolf spotted on the North Rim of the Grand Canyon National Park is considered to look more like the large bodied gray wolf populations that have been reintroduced to the northern Rocky Mountains with such success.

If so, it must have taken a remarkable journey – the nearest breeding population from which it could have come is over a thousand kilometers away near Yellowstone National Park.

The Center for Biological Diversity (CBD) welcomed the report. “In the early 1900s over 30 wolves on the North Kaibab, including Grand Canyon National Park, were killed by government hunters,” said Kim Crumbo, conservation director for Grand Canyon Wildlands Council. “The possibility that a determined wolf could make it to the Canyon region is cause for celebration, and we must insist that every effort be taken to protect this brave wanderer.”

The Fish and Wildlife Service are seeking to collect fecal samples to confirm that the animal is indeed a wolf, rather than a wolf-dog hybrid.

Two years ago a wolf known as OR-7 left his pack in Oregon to become California’s first wolf in 87 years, but is now back in his home state raising pups, adding credibility to the possibility of a journey such as this.

The gray wolf population of the lower 48 states has reached 5000, leading to proposals to remove them from the endangered species list. Nevertheless, the CBD notes they now cover less than 10% of their original range.
Wolves venturing outside their current range have recently been shot or poisoned in three states, leading the CBD to stress the reminder, “The intrepid wolf is currently fully protected under the Endangered Species Act, which prohibits killing, wounding or harassing the animal.”