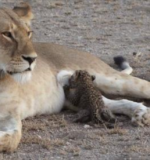 Photographs released from a Tanzanian wildlife area show a leopard cub suckling on a lioness. Yes, you have read that right.

The photographs were taken by a guest at a lodge in the Ngorongoro Conservation Area, a United Nations World Heritage site, back in 2017. (Since then another instance of a lioness nursing a leopard cub has been observed, which you can read about below)

Ingela Jansson, head of the KopeLion conservation group, told Associated Press that the lactating lion may have lost her own cubs and so was open to feeding the leopard cub. The leopard, meanwhile, appeared to have lost its mother.

“To observe a thing like this is very unusual,” Jansson remarked, jokingly describing the extraordinary instance of cross-species nursing as a case of “confusion at the supermarket” in which the lion “picked up the wrong kid.”

Wild cats and other animals of the same species have been known to occasionally adopt and suckle cubs that aren’t their own, and some birds have also been observed feeding chicks of another species whose eggs were inadvertently laid in their nests. But this kind of cross-species nursing is extremely rare in the case of wild cats, according to a statement from Panthera, a wild cat conservation group based in New York.

“It’s really mysterious,” Luke Hunter, president and chief conservation officer of Panthera, said of the new images back then. According to him, it was unclear whether the leopard’s mother was still around and could retrieve the cub from “lioness day care,” which would have been the best possible outcome.

However, Hunter cautioned that “the natural odds are stacked against this little fellow,” which may have since been killed by other lions that recognized it was not one of their own. He added that even in normal circumstances, only 40 percent of lion cubs in the area, which is part of the Serengeti ecosystem, survive their first year.

And indeed, the lion was seen hanging out with other lions the next day, but without cubs of any kind around.

This was the only sighting of a lioness feeding a leopard cub, or, in fact, any kind of non-lion cub, until last year an even more astounding discovery was made in Gir National Park in Gujarat, India, where a lioness adopted … well, another leopard cub. In this case, however, the unusual relationship lasted much longer, according to the New York Times.

The cub was about 2-month-old and had fuzzy ears and blue eyes – an adorable little fellow. The lioness spent weeks nursing and feeding him, treating him as if it was one of her own two sons, who were about the same age. Despite all the caring, however, the little leopard died some weeks later.

What made the unusual discovery even more interesting is that the lions and leopards of Gir National Park normally do not get along. At all.

“They compete with each other” for space and food, said Stotra Chakrabarti, a postdoctoral researcher at the University of Minnesota who studies animal behavior. “They are at perpetual odds.”

Dr. Chakrabarti and others detailed the case in the ecology journal Ecosphere. His fellow authors included a conservation officer and a park ranger, who first spotted the unusual family in late December 2018, hanging out near a freshly killed nilgai antelope.

For six weeks to come, the team watched as the mother lion, her two cubs and the leopard roamed Gir National Park. “The lioness took care of him like one of her own,” nursing him and sharing the meat from her hunts, Dr. Chakrabarti said.

The spotty little fellow’s new siblings were similarly welcoming, playing with their new pal and occasionally following him up trees. One photo shows the leopard cub pouncing on the head of one of his adoptive brothers, who is almost twice his size and clearly a good sport. “It looked like two big cubs and one tiny runt of the litter,” Dr. Chakrabarti said.

This “was surely the most ‘wow’ moment I’ve come across,” said Dr. Chakrabarti, who has been studying Gir’s lions for nearly seven years. His fellow researchers with an Asiatic lion conservation project in India, some who have been watching the big cats for decades, had “also not seen anything like this,” he pointed out.

Unlike their counterparts in Africa, Asiatic lions live in small, sex-segregated groups whereby lionesses often separate from the rest of the pride for a few months after giving birth and raise their offspring on their own. Had the makeshift family interacted more with other adult lions, the leopard could have been identified as an impostor, Dr. Chakrabarti noted.

But they were never to see what would have happened in such a situation, as after about 6 weeks, the researchers found the leopard cub’s dead body near a watering hole. A field necropsy was made, revealing that he had most likely died because of a femoral hernia he had since birth.

“It would have been fantastic to see, when the leopard cub grew up, how things would be,” Dr. Chakrabarti said. “But it didn’t happen.”