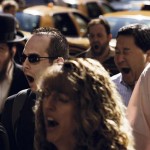 Why do we yawn?

Most animals that can respirate via their mouths can also yawn. We yawn, as well as most other mammals, birds, and fish. Even human fetuses have been observed yawning in the womb. Do animals yawn because they are bored or tired? Not necessarily. It is difficult to explain why other animals yawn; for some species, it may be a way to assert dominance or signal to others, while for others, it may simply be a way of stretching jaw muscles. But why did yawning come about in the first place, and what evolutionary advantage does it have, if any?

New evidence suggests that yawning might be a way to cool down our brains. When we initiate a yawn, our maxillary sinus expands and contracts, allowing air to flow through them. The back walls of our sinuses are a bit thinner than the front, so when cool air passes over them, it effectively cools down the brain. This is crucial, since our brains are extremely sensitive to high temperatures and work more efficiently in lower temperatures. Researchers tested this with rats by implanting probes that recorded temperature differences in the brain pre-yawn and post-yawn. They noticed that the temperature was highest just before a yawn, and dropped dramatically to normal levels after the yawn was finished. The evidence is strong; it seems that yawning might be directly coordinated with sinus ventilation and brain temperature.


There is also new evidence to suggest that yawning is actually crucial to brain development in human fetuses. Between 24 and 36 weeks of gestation, most mouth-openings seen via facial profile ultrasound were yawns. At the end of the 36 weeks, the yawning stops. Premature babies also yawn much more than full-term babies, suggesting that yawning may be an important step in development. We still do not know why this happens exactly, but the research is currently ongoing.

So yawning is important for our health, but why is it so contagious? It may be rooted deep in the primitive parts of your brain. One theory suggests that when we contagiously yawn, we participate in a hardwired behavior that once allowed groups to stay together and detect danger. This sort of “herding behavior” would have been extremely crucial, and yawning could have been helpful in communicating with other members of the group. Yawning could have also been used as a way for humans to communicate their alertness to one another (hence why we may compare it with sleepiness). There are many theories, but the truth is only half of humans are prone to contagious yawning. We’re guessing at least half of you yawned at some point through this post!