When They Take Off Their Robes, The Judges Are SHOCKED!! 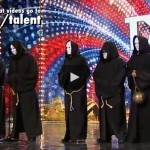 Are they monks or are they Halloween hooligans in disguise? The truth about these boys in black is guaranteed to completely surprise you.

Meet the Chippendoubles. They’re a dance group with a shocking secret hiding under their long black robes – and when they reveal it, you’ll see it’s the last thing you’d expect to happen on the Britain’s Got Talent stage.

As the seven guys stepped on stage in their masks and capes, they start dancing to disco for the extremely confused judges and audience members. Suddenly, one of the mysterious men ripped off his dark robe to reveal himself as the double of TV comedy king, Ricky Gervais. That’s when everything started to make sense. Chippendoubles is one of the most original impersonation acts of all time!

I won’t give away the identity of the other six men in disguises, but I will tell you that the last one to reveal himself is the best surprise of all. The judges were in stitches by the end of this amazing performance, shuffling them off to the next round.