What WAS this bright circle of lights over Houston? Bright, oval UFO photographed hovering above city’s stormy skies 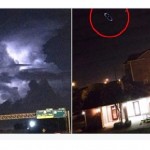 Could a UFO have visited Texas this week?
Several people have taken it to Twitter to post pictures showing a strange object floating through the Houston clouds during a storm last Monday.
Some of the pictures show a bright oval object hovering.
An unrelated picture shows a similar object through clouds.
There are others, some showing what appears to be lights underneath the ‘thing.’ Several people in Houston took pictures of what appears to be a bright, oval object hovering in the skies Another picture shows the ‘thing’ hovering in clear skies
‘I think the trick in UFO’s is figuring out what else they could be,’ Dr. Carolyn Sumners, vice president for Astronomy at the Houston Museum of Natural Science, told KPRC.
‘It’s easy to say that could be the aliens,’ she added.
Sumners said that the stormy weather in Houston on Monday could be an explanation.

If it’s a real object and it looks like it is, the more people who see it in different directions, the more likely we are to ‘figure out where it is, what it is and see if we can explain it,’ she told KPRC.
‘All the way back to recorded history, there are going to be things we can’t explain,’ she added.
‘That’s what makes it exciting.’ This picture shows the object, much farther now, hovering in Houston’s clear skies