WATCH: She’s Pouring Tons Of Salt Into A Vase. What She Ends Up With Is The Perfect Holiday Decor. 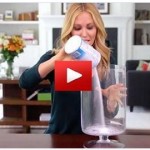 Cinnamon is an aromatic spice that comes from several different trees and is commonly used in various foods and drinks. It is popular in a number of dessert items, such as doughnuts, cakes, and let’s not forget cinnamon buns. It is also commonly used in tea, coffee, hot cocoa, and apple cider.

Cinnamon is not only a great way to flavor foods, but it is also regarded for its many health benefits, which include anti-microbial and anti-clotting effects, in addition to blood sugar control. The spice is also rich in manganese, which helps support skin integrity and bone production.

In this video, you will find out another awesome way to use cinnamon and many other easy tricks for making your home festive for the holidays.