WATCH: He Saw A Child Fall And Helped Him Get Up, But He Didn’t Know This Would Happen To Him. 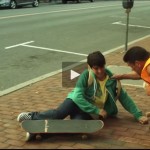 When he sees a child fall off of a skateboard, this construction worker helps the child back on his feet. This one moment of goodwill sets off a chain reactions of random acts of kindness toward strangers in this touching fan-created music video for Matisyahu’s “One Day”.

Matisyahu is a reggae musician, from New York, most known for his multi-cultural music style. He blends reggae and rap sensibilities with themes of Jewish identity. He has been performing since 2004, and tours extensively in the United States, Canada, Europe, and Israel. In 2006, Esquire Magazine lovingly dubbed him “the most intriguing reggae artist in the world”.

This song, “One Day,” was used by NBC for their advertisement of the Olympic games.