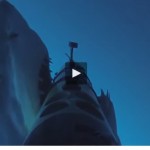 ‘SharkCam’ was deployed by researchers off the coast of Mexico last year, designed to offer a unique view of wild great white sharks. Luckily, it was also designed to withstand some serious shark bites.

REMUS SharkCam: The hunter and the hunted from Woods Hole Oceanographic Inst. on Vimeo.

As the video above shows, neither the scientists nor the sharks got quite what they were expecting.

The SharkCam — aka Remote Environmental Monitoring Units, or REMUS — is a torpedo-like robot equipped with six GoPro cameras as well as other tools for locating, tracking and recording radio-tagged wildlife. It was supposed to find tagged great whites and film them from a pre-determined “stand-off distance,” but the sharks beat it to the punch. They quickly began hunting it like they hunt seals: stalking from darker waters below, then surging up to bite the robot in its tail or midsection.

These seem to be predatory attacks, the researchers say, suggesting the sharks really thought they were hunting a seal. It’s fascinating to watch these ancient predators crash into their prey, displaying a level of gastronomic gusto that has helped them survive for more than 400 million years. (You can even see one lose a tooth on REMUS at the 2:01 mark.) It’s also fascinating to watch them realize this isn’t food, letting it drop unceremoniously as they swim off for something more palatable.

As monstrous as these sharks look chomping onto REMUS, it’s worth noting they aren’t the man-eaters often depicted in movies. Most humans are too scrawny to be worth their time, which helps explain why sharks of all species — not just great whites — kill fewer than 10 people worldwide in an average year, compared with the 100 million sharks killed annually by us. That doesn’t mean sharks aren’t legitimately scary, of course. It’s just a reminder that we can be even scarier.

REMUS has now tracked basking sharks and great whites, but it also has less harrowing missions on the horizon. According to WHOI, plans are underway to enlist the robot’s help in studying sea turtles.