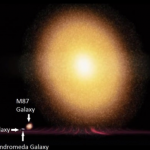 The largest galaxy in the known universe is simply staggering in size. But in order to understand its breadth, you need to understand a little something about our own corner of the universe. For starters, the Milky Way galaxy (our little home) is about 100,000 light-years across. Astronomers estimate that we have somewhere around 200 billion stars. Our closest neighbor, the Andromeda galaxy, is 2.5 million light-years away. It is about twice our size, coming in at 200,000 light-years.

The largest known galaxy is IC 1011. And it is 6 million light-years across. Take a moment to try and fathom that. This galaxy could easily swallow the Milky Way, Andromeda, and all of the space in between. It’s not just larger than our galaxy; it’s larger than our corner of the universe.

The Milky Way is a mere 100 thousand light-years. This beast is 6 million.

To help you understand just how immense this is, let’s talk about how long it might take to travel from one side of the galaxy to the other.

The fastest spacecrafts that we’ve ever built are the Helios probes. They were able to reach 157,000 mph (253,000 km/hr). This is pretty fast, especially when you consider that the average commercial airplane only travels some 600 mph (960 km/hr). In fact, these probes traveled 9 times faster than the International Space Station (ISS). Yet, even at this speed, it would still take more than 4,300 years to travel just 1 light-year. That means that it would take you 430 million years to travel across the Milky Way (a long time, to be sure). But it would take you 25.8 billion years to travel across IC 1011. You would literally need to start before the dawn of time in order to complete the journey.

“But,” some may say, “technology has advanced a lot since the Helios probes.” Very true. So let’s give ourselves the benefit of the doubt. Let’s say that we could theoretically travel 670 million miles an hour (1 billion km/hr), which is roughly the speed of light. Would that shorten our journey much? Sure. But not as much as you might hope. It would still take 6 million years to cross this galaxy, even at light-speed.

Learn more about this galaxy, and how it got so big, in the video below: