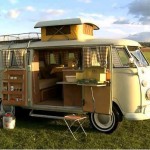 Verdier’s Vehicles have with their retro and stylish designed vans and campers brought the concept of camping to another level. With these uplifting additions to a somewhat unstylish category of vehicles, one can cruise the highways in a designer camper and be rather cool when enjoying the outdoors. But Verdier has not just upgraded a stigmatized vacation vehicle but made these solar powered self-sufficient campers part of, what they themselves explain as: “a new culture with its own rituals”. The founder Alexandre Verdier, who is both a philosopher and an industrial designer, “believes that technology should allow human beings to understand nature and its power”. Canadian designer Alexandre Verdier has given the cult-classic VW Microbus an eco-overhaul that tastefully updates the iconic breadbox on wheels.