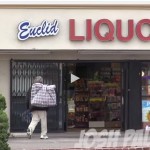 Regardless of how you feel personally about the homeless, one thing can be said for certain – they often have a bad reputation in society today. Whether they’re viewed as lazy, unhygienic, addicted, or just a nuisance as they’re frequently seen asking for money, it seems that they shouldn’t always be judged at face value.

After giving a homeless man $100, Josh Paler Lin decided to follow him around to see what he bought. Needless to say, when the first stop he made was a liquor store, Lin wasn’t all that shocked when the homeless man came out with a few bags.

But things are not always as they appear.
Thinking the man just made off with the spoils of a lucky day, they continued to follow him over the course of the next hour, where he simply walked a few miles. Before long, however, he made his way to a park. Not so surprisingly, there were many other homeless people at the location.

The homeless man then shocked both the cameramen and Lin alike.

Out of the bags he’d purchased at the liquor store, the man pulled out food and shared with the others in the park. As the video’s description reads: I wasn’t expecting to get this kind of footage… to be honest, I thought this video would be more an exposing homeless people video at first. But I’m so glad that I could witness and capture such a beautiful moment. This has to be one of the most amazing experience so far on this channel.

As can be seen, Lin approached the man once again where he spoke with him and explained his disbelief. After Lin explained he thought only one thing when the first stop was the liquor store, the homeless gentleman described that not all homeless are drug addicts and alcoholics but rather simply down on their luck.
Reflecting back on the moment, Lin wrote:

I did not only just help a homeless man, but I actually met an incredible human being and a friend. We were following him for a couple miles for almost an hour or so. Later that day we took him out to eat and got him a hotel to stay. The more I talk to him, the more I sense how genuine he is…. I gave him my number and told him to call me when he needs help. This again proof that not all the homeless people are bad people. Never judge a book by its cover. One love! 🙂

They say that some of the most giving people in this world are those with nothing to give, and I think that was proven here.

What do you think of this incredible act of generosity? Let us know what you thought the man was doing initial and your reaction afterwards in the comments.