Unsolved Mystery in China: Hundreds of Sheep Have Been Walking in Circles for Two Weeks Non-Stop 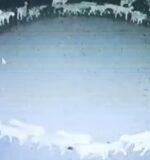 A bizarre, rather disturbing video has surfaced on Chinese state-run media platform People’s Daily, which shows hundreds of sheep walking around in circles without stopping.

The great sheep mystery! Hundreds of sheep walk in a circle for over 10 days in N China's Inner Mongolia. The sheep are healthy and the reason for the weird behavior is still a mystery. pic.twitter.com/8Jg7yOPmGK

It has since been revealed that the sheep have been doing this for almost two weeks, Marca reports. According to their owner, whose farm is located in northern China’s Inner Mongolia region, the sheep began their creepy practice of walking in circles on November 4.

Out the hundreds of sheep that Ms. Miao looks after, only one pen (pen number 13) has been behaving this odd way. Number 13? It makes it all just even more eerie.

We have seen reindeer circling in cyclones, but from sheep, this is the first time such behavior has been recorded in sheep.

According to People’s Daily post, however, the animals are healthy.