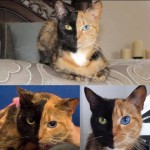 Anyone remember Venus the cat?

Venus is suspected to be a chimera, which is when two zygotes fuse into one, leaving the animal with two sets of genetic information. Essentially, she would be her own twin!

Others aren’t so sure that she is really a chimera and think that she could display mosaicism, which arises when genetic recombination results in different genotypes in a single organism’s tissues.

Venus was born as a stray on a dairy farm in 2009 but now she lives a comfortable life in a good home. She’s still doing quite well and is in good health.

Does this look like the face of a kitty that would get into the treats when nobody’s looking?? This is how we go to sleep every night….chest to chest and heart to heart! The other cat IS in fact a real cat and her name is Whiskeyanne. I believe she lives in Tennessee. I tracked down her owner & spoke to her when Venus’s page was first built and I saw this same pic of her. She IS a mirror image with the colors reversed. According to her owner she is about 10lbs (twice the size of Venus).

They are about a year apart in age. She was also found as a stray. Whiskeyanne does have a bigger white “bib” and also has white paws. Her body is more calico coloring than torti. Her whiskers are all white whereas Venus’s are white on the orange side & black on the black side. Her line appears to stop at her upper lip where Venus’s goes all the way down her neck to her small white “bib” which is the only white she has on her. Whiskeyanne has some black on the orange side of her face above the eye where Venus’s is all orange with a straighter line. Whiskeyanne’s ears are the same color while Venus’s ears are the same color of that particular side of her face. According to her owner she is very sweet just like Venus. I think it’s fascinating that these 2 look so much alike with the most likenesses as any other cat I’ve seen. I think she’s beautiful and am hoping maybe the 2 can meet for a photo together one day. I hope you guys enjoyed this and some of you picked out the whisker color difference which I didn’t think anyone would get. Good job!! People are always shocked when they find out Venus is real & not photoshopped. Well how about 2 that have almost all the same features??!! Great shock value to share post with your friends!