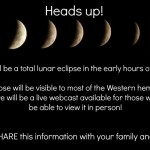 Fred Espenak (NASA/GSFC) has broken down the predicted timeframe of the eclipse:

When the eclipse happens worldwide
Lunar eclipses look approximately the same all over the world and happen at the same time.
The times displayed might be a minute or two off actual times.

The lunar eclipse occurs when the Earth is situated directly between the sun and the full moon. The moon passes through Earth’s “umber,” making it appear a dark reddish-orange color. Because the Earth is completely obstructing the moon from receiving light from the sun, the light gets there indirectly as it has been filtered and refracted through the atmosphere.

Now, even though there is a full moon each month, there isn’t an eclipse each month because the Earth, moon, and sun aren’t exactly in line all the time. The moon’s orbit around the Earth is inclined 5° more than Earth’s orbit around the sun. This tilt keeps the moon out of the direct path of Earth most of the time. Lunar eclipses aren’t rare, as they occur about twice a year, but not all of them are total eclipses, and some are so faint that the shadow is barely noticeable.

However, the eclipse on the 15th is fairly special, as it is the first in a tetrad of total lunar eclipses, spaced about six months apart. All four should be visible to nearly everyone living in the United States.

For those living in areas where the eclipse won’t be visible (or for those who aren’t able to head outside and see it), the good folks at the Slooh Space Camera are putting on a special webcast of the event. Bob Berman and Paul Cox will be hosting the event and will be providing commentary leading up to the eclipse.

You can view the webcast here: