Time for a snooze: Black bear photographed taking a nap – in a person’s backyard hammock 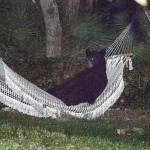 A bear in Florida apparently was in desperate need of a nap earlier this week – lucky for the bear, it happened to come across the perfect spot for a late-day snooze: A hammock in someone’s backyard.
The American Black Bear reportedly was spotted in a Daytona Beach neighborhood knocking around trash cans and scaring some of the neighborhood’s residents on Wednesday night.
About 7:45 Thursday, the bear was spotted again – in a much less threatening position.
SCROLL DOWN FOR VIDEO Don’t get up: The photographer who snapped these photos says the bear didn’t seem to mind his presence as he took photos from 60 feet away Refreshed: After his 20 minute snooze, Torres says the bear ran back into the woods behind the home Scary: Residents say the bear was in the neighborhood the previous night banging around in trash cans
Photographer Rafael Torres was in the area snapping photos when he spotted the bear, which presumably was the same bear that was causing such a ruckus the previous night.
Torres followed the bear and watched as it walked into a person’s backyard, crawled into the hammock, got comfortable and took a load off.
Torres says he was about 60 feet away from the animal taking photos – and the bear didn’t seem bothered by his presence.

At about 8:15 p.m. – about 20 minutes after first crawling into the hammock – Torres says the bear climbed down and ran back into the woods behind the home.
Torres tells NBC affiliate WESH that this is the first time he’s seen a black bear in the residential area. Famous Amis: Video of this bear – named ‘Famous Amis’ – taking a break in a hammock was posted to Youtube in 2006 and quickly went viral Bears love hammocks: These two baby black bears were seen playing around on this hammock in September of 2013

Black bears apparently are drawn to hammocks – in the last several years, there have been several photos and videos posted on the Internet of the animals playing in backyard hammocks.
The most famous, perhaps, is a bear given the name ‘Famous Amis’ after video of him taking a break in a hammock was posted to Youtube in 2006. The video has been viewed nearly 340,000 times.
In one of the more adorable videos, two baby black bears are shown playing around in a hammock in a person’s backyard – and the only thing cuter than two baby black bears playing on a hammock is two baby black bears falling out of a hammock, which is exactly what happens in the video.