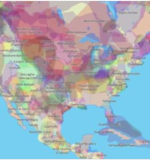 Land acknowledgments are a way to pay respect to the Indigenous people who lived on the the land before the arrival of Europeans. A new interactive map allows you to do just that. The map, probably the most popular and sophisticated of its kind, allows you to enter your address, or any address for that matter, and see which Indigenous nations lived on that particular land. If you search the address of the White House in Washington DC, for example, you’ll see it’s located on land formerly inhabited by the Nacotchtank (Anacostan) people. The map also shows the distribution of native languages and treaties, and links out to multiple websites about Indigenous tribes and nations. The map was created by Native Land Digital, a Canadian not-profit led by Indigenous people. Their goal is to provide information about the history and sacredness of native lands around the world. By doing so, they hope to build stronger links between Indigenous and non-Indigenous people, as well as “right” some of the wrongs of history.

“Native Land Digital creates spaces where non-Indigenous people can be invited and challenged to learn more about the lands they inhabit, the history of those lands, and how to actively be part of a better future going forward together,” their website states.

“What we are mapping is more than just a flat picture. The land itself is sacred, and it is not easy to draw lines that divide it up into chunks that delineate who ‘owns’ different parts of land. In reality, we know that the land is not something to be exploited and ‘owned’, but something to be honoured and treasured. However, because of the complexities of history, the kind of mapping we undertake is an important exercise, insofar as it brings an awareness of the real lived history of Indigenous peoples and nations in a long era of colonialism.”

Native Land Digital acknowledges that their map is a work in progress and far from perfect, but they welcome suggestions from users and continuously update it.