This Cop Forgot The Camera Was Rolling When He Did THIS…I Can’t Stop Laughing!! 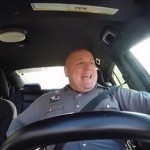 With all the recent news of the relationship between police and the public, sometimes it’s hard to remember that police officers are just like us. They’re human. They make mistakes just like we do. But they’re also heroes that put their lives on the line to protect and serve the public.

One police officer from the Dover Police Department in Dover, Delaware proved yesterday just how human he really is and now his hilarious moment is making news everywhere.

In a video released by the Dover Police Department on their YouTube page, one very funny police officer is caught on his DashCam rocking out to none other than Taylor Swift’s enormous pop hit “Shake It Off.”

Called “A Dover Police Department Public Affairs Production,” the video shows the officer in his car, going about his daily route, until Swift’s song starts playing on the radio and he goes into the most hilarious lip synch rendition of the song we’ve ever seen.

The best parts of the video, however, are the times when the officer approaches a pedestrian. In order to maintain his professional appearance, the officer stops lip synching and dancing, and waves and nods affectionately. After checking to make sure he’s out of sight, he immediately pops back into his “Shake It Off” routine. It’s hilarious!

The Dover Police Department YouTube page says this is the first in their new “DashCam Confessional” series and we cannot wait to see what they have in store next.

See, police officers are just like us. They too like to rock out to Taylor Swift when they think no one is looking. Just make sure you keep your eyes on the road, sir!