This Circular Island in Argentina Not Only Floats, But Also Rotates Constantly 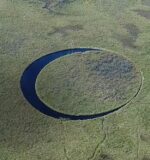 And we don’t really know why.

South America’s second longest river, the Paraná, which has a length of 4,880 kilometers, flows through three countries: Brazil, Paraguay and Argentina. 4,880 kilometers is no short distance – it gives plenty of opportunities for discovering amazing things. In the case of the Paraná, one of the most exciting discoveries was made at its delta: an island 120 meters in diameter, almost completely circular in shape, and floating freely on its axis.

So-called floating islands are found in many parts of the world, including Finland, Turkey, Italy, Serbia, the Danube Delta in Romania and Ukraine, Lake Titicaca on the border between Bolivia and Peru, Lake Loktak in India, and many other places. However, this Argentinean island stands out from the rest because of its shape and its continuous rotation

Floating islands are usually based on large roots that have ended up in the water and on which some other aquatic plant starts to grow. Plants found along the shoreline of wetlands often spread inwards from the shore, to where their roots no longer reach the deeper parts of the lake or river. When this happens, they use the oxygen in their root mass as buoyancy and the surrounding vegetation as support to survive in the water.

However, occasional violent storms can tear away these floating islands of vegetation, which can then be carried back and forth across the lake by the wind. Usually, they find calm somewhere again along the shoreline or break up completely due to stronger winds.

In some cases, however, the floating islands may persist for longer periods. In the aforementioned Lake Titicaca, for example, a group of 120 islands has been taken by an indigenous tribe, the Uru, but these islands require constant maintenance to survive.

The unusual piece of land known only as “El Ojo” (Eye Island) was formed by some very special currents that keep the circular island in constant motion. As it collides with its surroundings, it repeatedly detaches the muddy bits that might have given it a rest.

The island itself was just recently discovered by Argentine filmmaker Sergio Neuspiller, who was looking for a location for one of his films about paranormal phenomena when he came across the island in the delta. He didn’t know at the time that the piece of land was spinning around slowly – he only found out when he returned to the site shortly afterwards and was surprised to see that the island had moved elsewhere in the meantime. The movement can also be seen in Google satellite images taken at different times.

The recordings also prove that the island has been in the Paraná delta for almost 20 years, since 2003. Neuspiller got preoccupied with the question of the rotating island later, around 2016, when he, together with an engineer from New York, started raising funds to find out what’s behind the phenomenon. They wanted to collect 50,000 dollars to solve the mystery, but since not even a fifth of the amount came together, their investigation, which would have also covered the supernatural, was not completed. What a shame.