They’re Selling This 1875 Mansion For Nearly Nothing. When I Saw Why, I Got Chills! 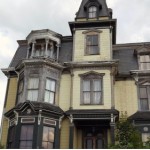 In today’s world of boxy McMansions and cookie-cutter pre-fab homes, it can be hard to find a house with character.

That’s why I instantly fell in love when I saw this exquisite Victorian home. With its large bay windows, Mansard roof, and gingerbread trim, it has all the makings of a living dollhouse.

So I started doing a little investigating — and what I found shocked me. This was clearly no ordinary historic home.

Just like this strange home from the same era, the S.K. Pierce mansion house contains a chilling secret, and it seems to have lowered its market value. ——————————————————————————————————-
The house experiences so much paranormal activity, it’s been investigated by TV shows like Ghost Hunters, Ghost Adventure, My Ghost Story, and 10 Most Haunted Places in New England. So who is it still roaming the halls of this gorgeous mansion? Some say they’ve seen the figure of a busy servant girl; others, a little boy who stares longingly out the front window; to some, a sad woman has appeared. ——————————————————————————————-
But just a couple of weeks after moving in, the couple began to experience strange and terrifying things. They saw objects move, heard chants and whispers, and smelled foul odors throughout the house. —————————————————————————–
The activity intensified. Soon, shadows darted from room to room, the door of their master bedroom was banged upon, voices called their names, and full-body apparitions began to appear. ————————————————————————————-
Investigators have also witnessed many chilling phenomena. During one nighttime exploration of the house, they recorded a strange voice that seemed to say, “Squeeze every throat.”