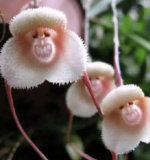 First of all, I had no idea that there was an entire sub-culture of the internet dedicated to orchids. Second, how does this monkey face orchid look so much like a monkey?

Nature is so incredible. However, my cynicism popped up on this one… was this flower crafted in a lab? Did men in white coats decide that an orchid would look cool with a monkey face on it, and then go about splitting genes or whatever to make it happen?

The orchid known as Dracula Simia is also called the dracula orchid, or the monkey faced dracula orchid. And it turns out that it was not created in a lab by monkey-and-orchid-obsessed scientists.

It’s a strange and beautiful product of Mother Nature herself.

Believe it or not, these incredible flowers do in fact grow in the wild. The monkey face orchid is only found in the cloud forests of Peru and southeastern Ecuador.

Further, they only grow at altitudes of more than 3,000 feet! The plant itself blooms in any season, although it is quite picky when it comes to optimal conditions.

The monkey face orchid is one of the rarest species of orchids in the world. It’s also very unique in the orchid world. It’s flowers smell like ripe oranges, and they take around seven years to flower. Seven years!

Because of this, the continual degradation of the genus is so incredibly sad. This rare flower, which is only able to grow in such specific conditions, is being threatened by habitat loss throughout Peru and Ecuador’s high region areas.

Who knew that even flowers become endangered? I mean, you might. But I’ve never really thought about it.

The more deforestation and demolition happens in natural growth forests of Peru and Ecuador, the more these flowers are at risk. The biggest reasons for the loss of this precious land are animal agriculture, forestry, and mining.

The Monkey’s “Facial Expression” Can Vary From Flower To Flower

To make them even cooler than they already are, these flowers are like snowflakes. No two of them are the same. In fact, each of them has a different monkey face. Some of them don’t really look like monkeys, but they’re still a monkey face orchid.

Some orchid lovers get particular joy from the “expression” of the different faces and what they say. There are sad, surprised, and joyous monkey faces in these flowers… so say them.

Are Dracula Simia Plants Hard To Grow & Care For?

Yes, Dracula Simia are hard to care for. The biggest road block in growing this choosy plant is that it takes seven years of dedication to see it through to flowering!

The soil needs to be kept quite moist, so you don’t need to worry about over-watering this plant. It needs to be misted as well. Further, try to keep it out of the sun, as the monkey face orchid grows in shade of cloud forests and will not do well with direct sunlight.

As for why it’s called “Dracula”, the scientific name of the flower literally means “little dragon”. They named it that because of the blood-red colour of several of the species. Plus, the strange little spurs of the “sepals” are quite dramatic, also contributing to the name.