The Underwater Geology of the Hawaii Islands is Just Amazing 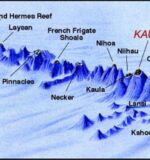 The Pacific Plate is moving northwestward at about the same rate your fingernails grow – several centimeters per year. This constant plate movement over a local volcanic “hot spot,” or plume, has produced a chain of volcanic islands, one after another in assembly-line fashion. They go (really) by the name Hawaii.

Situated near the middle of the “Pacific Plate” on top of a “hot spot”, the Hawaiian Islands (also known as the Hawaiian archipelago) consist of eight major islands and 124 islets stretching from the Big Island of Hawaii along a northwest line for 1,500 miles toward Japan and the Aleutian Islands of Alaska. In total, the islands cover an area of 6,459 square miles.

The largest landmass in the Hawaiian island chain is currently the Big Island (yes, that might change over time), followed by the other seven major islands at the eastern end of the chain, from west to east: Ni’ihau, Kaua’i, Oahu, Molokai, Lanai, Kahoolawe, and Maui.

The youngest island in this chain, Hawaii, emerged over a million years ago as five separate volcanoes on the seafloor. By erupting again and again, over time the five volcanoes created thin layers of lava spread upon older layers, continuing to build up until the volcanic heads emerged from the sea – to form today’s Hawaii.

But how can five volcanoes create one island? Well, they probably erupted at different times, creating flows that overlapped the other mountain’s flows, with the five peaks eventually becoming the single island we see today.

The Kohala Mountains were the first to form by sitting over the ‘hot spot’ in the plate. However, as the plate shifted, so did the location of the rising magma, moving to Mauna Kea, Hualalai, Mauna Loa, and eventually Kilauea.

And the process hasn’t stopped since then! The newest seamount, named Loi’hi, is forming off the southeast coast of the Big Island right now (see second map above and read more about Loi’hi below). In another 50,000 years or so, it too may become the next Hawaiian island, or it may even join to become the sixth peak of the Big Island. Currently, only the volcanic remnants of Kohala are completely extinct, never to erupt again. The rest of the volcanoes on the Big Island aren’t quite ready yet!

The Big Island’s largest volcano is called Mauna Loa and makes up approximately 51% of the island. Still, most people have a surprisingly hard time finding it as you can’t tell from its shield shape you’re seeing an actual mountain.

Actually, all of Hawaii’s volcanoes are “shield volcanoes,” named after their resemblance to the shape of a warrior’s shield. Shield volcanoes are formed by molten lava rising from a hot spot in Earth’s crust and erupting through various vents and rifts on the surface, eventually flowing down the gentle slopes toward the ocean, building up layer upon layer over millions of years.

The eastern slopes of Mauna Loa have another volcano, Kilauea, the world’s most active volcano and home to the fire-goddess, Pele. Some time ago Kilauea was believed to be a vent of Mauna Loa, but by today it has been revealed that it has its own magma chamber and is completely separate from its larger cousin.

The other major volcano on the island is Mauna Kea, which makes up about 25% of the island’s total landmass. Mauna Kea is significantly easier to spot than Mauna Loa, often recognized by its snowy cap in the winter months, from where it actually got its name from (Mauna Kea means “White Mountain”). Now there’s a really interesting fact about this volcano: reaching a total elevation of some 33,000 feet from the sea floor, of which only 13,780 (approx.) feet exist above sea level, the mountain is actually the highest point in the entire Pacific Ocean and the world’s tallest mountain from base to summit!

The Big Island’s other volcanic mountains are Hualalai in Kailua-Kona on the west side of the island and Kohala on the northwest tip of the island.

Kohala, the oldest mountain on the island, shows much more geological wear than its younger counterparts. The amazing sea cliffs you can see today were likely caused by a giant landslide some 200,000 years ago.

As previously mentioned, just 18 miles off Hawai’i’s southeast coast is the undersea volcano known as Lo’ihi. Lying approximately 3,178 feet below the surface of the ocean, Lo’ihi is an actively erupting seamount.

When Lo’ihi eventually emerges from the sea, it will likely join with Kilauea (which, in theory, will be much larger by that time) and become the sixth peak in what is now Hawai’i’s largest island. That won’t happen overnight though – it will most likely take a good 50,000 years or more before that happens. So don’t book your hotel room just yet.

Even though that 6th peak will have to wait to be added to it, the Big Island of Hawai’i seems extremely large compared to its predecessors in the chain. Historically speaking, however, it’s not that much bigger after all. Just across the “Alenuihaha Channel” you have the island of Maui and it’s largest volcano, Haleakala, the largest dormant volcano in the world. Its highest peak is at 10,023 feet, and its crater stretches approximately 7.5 by 2.5 miles. Still, since most of this mountain lies below the ocean, it seems to be much smaller than the Big Island. Measured from the sea floor, however, Haleakala would rise to a height of nearly 30,000 feet! This massive volcano, which formed 75% of the island of Maui, is dormant, but not extinct. The last eruption didn’t happen that long ago – some time in the late 1700s.

Geologists believe Haleakala was one time not only joined to the west of Maui, but also constituted a single landmass with Lanai, Molokai, and Kahoolawe – known as Greater Maui (Maui Nui). That landmass’ submergence resulted in the volcanic body moving away from the Hawaiian hot spot, with large portions of the Big Island disappearing in the Pacific. The result is the four major islands we see today.

A similar fate awaits the Big Island. As the Pacific Plate carries the islands piggyback-style away to the north-west and the hot spot “moves away”, the Big Island will also fall victim to subsidence and erosion, eventually meeting a similar fate to that of Maui Nui. It will turn into separate, smaller islands as the ocean encroaches on the flanks of each separate mountain.

For the next few thousand years, however, the Big Island will remain just that big! Also, Mauna Loa and Kilauea are currently still active and erupting, so the island of Hawaii is still growing.

The geologic future of the islands is still in the making.