The Secret Behind How This Guy Balances Rocks Is Very Unusual. Can You Guess It? 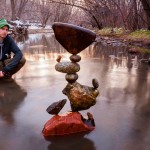 Take a peek at these amazing pictures and then go ahead and let that draw drop – the way that this guy balances rocks is simply amazing!
Michael Grab has definitely mastered the art of stone balancing, as you can see from the assortment of photos of his works listed here. But, if you want to take an even closer look at what Grab does, you can head on over to his very appropriately named website, Gravity Glue, for even more photos, information, and videos.

Although, considering how amazing this balancing feat is, I’m sure you’re more eager to know his secret. Luckily, he doesn’t mind sharing it with the world.

According to Grab, it’s all about the indentations. He explains in further detail…

By paying close attention to the feeling of the rocks, you will start to feel even the smallest clicks as the notches of the rocks in contact are moving over one another. In the finer point balances, these clicks can be felt on a scale smaller than millimeters. Some point balances will give the illusion of weightlessness as the rocks look to be barely touching. Parallel to the physical element of finding tripods, the most fundamental non-physical element is harder to explain through words. In a nutshell, i am referring to meditation, or finding a zero point or silence within yourself. Some balances can apply significant pressure on your mind and your patience. The challenge is overcoming any doubt that may arise.”

Clearly though, rock balancing is easier said than done, and the structures that Grab creates over and over again are an amazing feat. However, while you may think that the actual act of balancing the rocks is the most difficult part of the practice, Grab discloses that overcoming physical and mental barriers can be the most challenging aspect instead. According to him, after balancing rocks for a given period of time, the body tends to both mentally and physically want you to stop. So, how does Grab overcome the discomfort? He recommends to “lean into the pain” and just keep going. Plus, rock balancing can be a great way to relax, the streaming water sounds and intense focus creating a meditative state.

Grab definitely has a talent for the art form, which is easy to tell from all the fantastic structures he’s built. Apparently, he got started a few years ago when hanging out with a friend at a creek one day.

They became bored, talked about rock piles, and decide to try to create some themselves. Impressively, after only a few hours, Grab had balanced several rock structures and decided to keep making them. Today, he’s even more practiced and seems to understand rocks inside and out, with an inept sense of knowing just what type of rock he needs for every situation. He states… “I’ll look at various shapes, depending on kind of how I want the balance to go, and a lot of times the rock I will find and actually bring or collect and use is one that I know can balance. Like before I even put it next to the stack, I’ll just find some kind of small notch that I’m absolutely sure will balance.”

Given all the positive aspects of rock balancing, it’s certainly something that others could benefit from trying as well. It’s a great way to relax, get in touch with natural surroundings, reduce stress, be creative, and have fun. Plus, the only thing you need to do is put one rock on top of the other.