The Amazing Mating Dance of the Peacock Spider 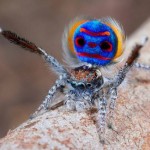 This is the peacock spider Maratus volans. Jürgen Otto was the first to film this spider’s mating dance.
Credit: Jürgen Otto
View full size image
The animal dances and lifts up its tail-flap, which, once unfurled, resembles an abstract Indian blanket of intense color. The tiny creature hops about, lifts up its legs alternately like an air traffic controller, gesturing this way and that. Its large, furry mouthparts almost make it look like it’s smiling, or at least mildly amused at this outrageous act.

Meet the peacock spider. Males from several species within this group of spiders put on remarkable mating displays to win over mates of the opposite gender. Jürgen Otto has done perhaps more than anybody else to document and share footage of this arachnid’s terrific breeding ritual — it has even won over people who previously hated spiders, Otto told LiveScience. [Watch the Peacock Spider’s Mating Dance]

For a creature so tiny — most species are around an eighth of an inch (a few millimeters) long — the display is surprisingly complex and visual. Due to their tiny size, and perhaps because they only live in certain areas in Australia, the animals haven’t been well-documented. But Otto, an entomologist who usually studies marine mites, is working to change that. LiveScience corresponded with Otto to hear more about his experiences with these remarkable animals.

Jürgen Otto: I realize that they are colorful, but to me, that is not the most important aspect, since I am partially colorblind. It is the fact that they perform some complex rituals on a scale at which it appears almost surreal, to the point where it is hard to believe. People associate complex behavior usually with large animals, usually vertebrates [animals with backbones], so it is very unexpected to see a similar behavior in much smaller invertebrates, in particular spiders that most people hate so much. [Incredible Photos of Peacock Spiders

also love the way they interact with their environment, how they exhibit fear, excitement and curiosity. In fact, somebody has called them “kittens with too many legs,” and I think that is a very good description. Obviously the two large front eyes contribute a lot to that impression. These spiders are perceived as cute, even by the staunchest of arachnophobes, and I regularly get comments from people telling me how watching my videos have helped them to overcome their fear of spiders. I also like that it requires a lot of patience and persistence to observe, photograph or film them. And only those who are prepared to invest the effort will be rewarded.

The Purcell’s peacock spider, like most of its ilk, is quite tiny.
Credit: Jürgen Otto

LS: How did you first get interested in peacock spiders?

J.O.: I did not know anything about them until I stumbled over one during a walk in nearby bushland [near Sydney], purely by accident. It attracted my attention in the way it jumped — it seemed more nimble than other spiders. The specimen I saw then was one of Maratus volans, and I had no idea at the time what it was or that there were other similar species.

While doing some more research I found … that there was a suspicion that Maratus volans would use its flaps in courtship. But nobody had actually seen [this].

A couple of years later, I finally got lucky and was able to observe and photograph the courtship of that spider [for the first time]. I realized that this was something very special and exciting, not only for me, but the entire world.

So I kept going, photographing this species at first and later filming it, once I figured out how to use the video mode in my digital SLR [camera]. Then I learned that there are many more species out there, most of them still not described who had a similar behavior. One by one, I tracked those down … some were completely unknown to science. The biggest buzz for me was when I managed to get the first photographs of the color pattern of one species’ tail flaps.

LS: What is your favorite type of peacock spider?

J.O.: That’s a really a hard question to answer. In a way I like them all, and all of them have their special charm. Maratus volans, I think, is still the most flamboyant of all, so probably is my favorite, probably also because my obsession with peacock spiders started with that species. However, Maratus vespertilio is probably a close second. I do think it is extraordinarily cute, and I like this species for its male-male hopping contests as well, something I have not seen in any species. [Creepy, Crawly & Incredible: Photos of Spiders]

LS: How do you film peacock spiders?

J.O.: When I started to film them, I had no idea about how to go about it. I simply thought one day to explore the video option on my DSLR, a Canon 7D with a 100 mm macro lens. So I just kept filming them and added scene after scene to my collection. I had no prior experience in editing video footage.

The equipment that professional documentary makers use is very different from mine, much larger cameras, big steady tripods etc., and for a while I thought that getting such equipment would be something to strive for. However, I now realize that the small, simple and cheap setup I used was almost ideal for the job as it allowed me to follow the spiders on the ground and use natural lighting. Once you find a place where they occur, you simply have to search for specimens and watch them, or better find a pair that is already engaged in some courtship.

J.O.: I am not sure, but it evolved probably in a similar fashion as it did in birds of paradise or peacocks, a result of sexual selection. [Sexual selection involves the development of exaggerated features, like the tail-feathers of a peacock, which broadcast an animal’s evolutionary fitness.]