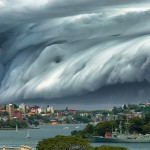 An extraordinary meteorological event hit the coast of New South Wales, Australia this past weekend. The ominous “cloud tsumnami,” as Twitter and Instagram users dubbed it, swept over the city of Sydney, stunning residents.
The massive formation which is actually a shelf cloud, was said to measure nearly two miles long, and brought with it powerful thunderstorms, heavy rains, and forceful winds. Beachgoers didn’t exactly have a great day out in the sun and the sand, though many posted some pretty incredible images of the shelf cloud.

The shelf cloud is typically the leading edge of a thunderstorm, attached to the base of the parent cloud that contains the storm.

The strange wave-like appearance is caused by the cool sinking air from the storm’s downdraft spreading out over the land, meeting the warm air being drawn into the storm’s updraft. One witness to the terrifying storm told CNN, “Walking towards the beach it looked to me like a huge wave coming from the back of the ocean about to swamp us all!
“People were running from the streets to capture the unbelievable cloud formation.”

For those that weren’t there, timelapse footage from Twitter users Will Reid and Hugo Vann reveal what it was like as the clouds moved in.

Reid, a documentary maker, tweeted with his video, “I think Sydney just perfected the shelf cloud.”
Nicole Keijzer told the news site that was on her way to Bondi Beach to swim when she spotted the cloud that she described as “wave in the sky.”
Keijzer sent CNN the photo below, explaining, “It was a beautiful morning, and suddenly the ocean turned a very light aqua blue, which contrasted the sky that began turning black.

“People started running down to the cliff edge to take photos… All of a sudden it felt very muggy, and the wind turned warm.” Keijzer said that she “quickly abandoned the beach when she saw the rain approaching,” adding, “I saw the rain in the distance and everyone along with me ran out of the beach before getting pelted on.”