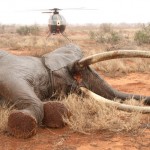 Spotted from the air by the David Sheldrick Wildlife Trust’s Aerial Surveillance Team, an African bull elephant was seen to be struggling to keep up with a number of other male elephants he was travelling with in the vast Tsavo National Park. DSWT Pilot Neville Sheldrick immediately recognised this all too familiar suffering, and a swelling on one of the bull’s hind legs confirmed to him that the elephant had been hit by a poison arrow. Across Africa elephants are being targeted for their ivory, to supply a rampant illegal ivory trade. A trade driven by a demand from China, where ivory is seen as a symbol or wealth and status. A report published in August 2014 revealed that more than 100 000 elephants have been killed in the last three years, this equates one elephant killed every 15 minutes.

Pilot Neville Sheldrick immediately reported the case to the DSWT Field Headquarters and Kenya Wildlife Service (KWS) Veterinarian Dr. Poghon mobilised. He reached the scene rapidly thanks to the DSWT’s helicopter and darted the elephant from the air with a high dose of anaesthetic. All the while the DSWT/KWS Tsavo Vet Unit was travelling by land to the scene, arriving to support Dr. Poghon in the pending treatment.

Fortunately the bull elephant fell to his left side providing easy access to the wound. The helicopter was used to push back the other males, understandably concerned for their fallen comrade, so that the injured bull could be treated for what is a life threatening wound.

A large amount of dead tissue was cut away from the wound and Dr. Poghon was soon battling against the clock as the first rains of the season chose to arrive at this moment, bringing behind them a thunderstorm. Concerned that the large bull elephant might struggle to safely gain his footing on the increasingly muddy ground, Poghon worked rapidly in cleaning the wound, administering a long acting anti-biotic and finally packing the wound with green clay. The reversal anaesthetic drug was given.

Soaked and coated in mud, Poghon watched from the helicopter as just minutes later the initially disorientated elephant rose to his feet and slowly moved to re-join his male friends who remained close-by.

“Our teams on the ground are there to carry out just this kind of lifesaving work, however when one considers the scale of Tsavo, it is a testament to the abilities and skills of our pilots and ground teams that we not only identified this injured elephant, but could so rapidly react to save his life” says Director of the DSWT Rob Brandford. He goes on to say: “The use of poison arrows is all too common, resulting in a slow and agonising death for an elephant if left untreated. In just the last two weeks our Tsavo teams working with the Kenya Wildlife Service have been able to save 11 elephants from poison arrow wounds”.
The poaching of elephants for their ivory is at exceptionally high levels and the slaughter of Africa’s elephants, which would have included this irreplaceable treasure had it not been for the intervention of the DSWT, is impacting not only the species, it has a negative economic, environmental and political impact.