Skipping Rocks On Frozen Lake Makes The “Coolest Sound Ever” 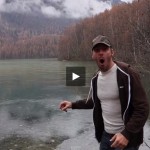 What happens when you skip a rock across a frozen lake? If a video that is developing plenty of interest right now is correct, you get a noise that sounds like something out of a science fiction film or a Pink Floyd outtake.

Most of us have tried to skip stones across ponds, and some have even managed to make the pebbles skip several times across the water. Only those living at higher latitudes get to try the same thing on frozen lakes. So when Cory Williams, who exists online as DudeLikeHella, found a frozen lake in Alaska, he was pretty excited. Well, very excited. But not as excited as he became when he heard the sound the stones make. The interesting stuff starts at around the 4.00 mark.

Understandably, some people wondered if the sound was real, or if Williams had added it in later. After all, if this is the sound the stones always make on frozen lakes, how come everyone living in colder latitudes don’t hear it every winter? Plenty of inhabitants of higher latitudes have confirmed hearing these sounds before. According to Canadian website Cottage Life, “Underneath the ice the water isn’t solid. Ice vibrates up and down, similar to a drumhead or cymbal vibrating after being struck.”

The echoing effect is a product of the different speed of sound in different media. The speed of sound in air is 343 m/s (at 20°C), but this rises to around 1,400 m/s in water and more than 3,000 m/s in ice, although even the latter can vary. Sound waves that make part of the journey to our ears through ice reach us before those that come directly. To complicate things a little further, the “speed of sound” can vary with frequency. In air this effect is small, but in ice it can be substantial, a phenomenon sound artist Andreas Bick has used to remarkable effect.

Not everyone who has tried skipping stones on ice has had the same experience because, as Cottage Life notes, it also depends on how the ice was formed.

“Different ice produces different sounds: A high-pitched noise when your rock hits the lake likely means you have ‘clear’ ice. This is the glassy, see-through ice that’s formed under cold, still, non-snowy conditions. ‘Snow’ ice—the opaque ice that forms after snow falls on the surface of the lake, becomes saturated with water, and then freezes—produces a lower-frequency sound, because fine grains in the ice absorb some of the noise.”