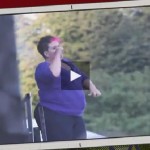 The American Sign Language interpreter’s spirited translation of Lamar’s performance of “F*ckin’ Problems” was also epic in its own way — and a YouTube video of the performance (NSFW language, naturally) caught the eye of a number of music and culture blogs this week.

You don’t need to know sign language to understand what’s going on at 1:15 in the video.

Well done, Amber Galloway Gallego! We agree with HyperVocal: All hip-hop concerts should hire folks who do what you do from here on out.