She’s In Just Her Undies In Front Of The Camera, But What She Said Made Me Stand And CHEER! 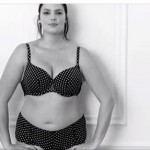 Are you an angel? I’m not. The truth is most women are not.

Most women don’t have flat abs, sculpted thighs and aren’t 5’11. That’s just how it is.

Today, women are fed up with being told how to look at all times, like this mom who is giving hyper-sexualized dolls a make-under and these moms who are making their daughters smarter dresses!

When it comes to clothes, especially lingerie, most are tailored to women who only fit one mold.

So what about women who want to feel beautiful, and even a little sexy, in their undergarments, but aren’t exactly VS Angels?

Enter Lane Bryant and their new campaign that has millions of women talking…about how good they feel in their own skin.

The “I’m No Angel” campaign is all bout embracing women’s curvy, big, and natural bodies.

Of course Victoria’s Secret Angels are gorgeous, but…so are the rest of us. Let’s face it, there are more of us than there are of them.

When I was a kid, I don’t remember ever having a national clothing line suggest that anything but the standard size 2 was pretty.

Is that really the world we want our daughters to live in? One where, if they aren’t a cut from a certain cloth, then they aren’t beautiful?