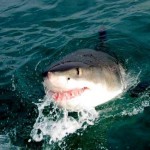 Almost 40 years on, scientists and conservationists are still picking up the pieces from the iconic movie “Jaws” that led the world to believe that sharks are ferocious man eaters. Sparked by fear and the idea that shark catching is “sexy,” numerous species experienced a worrying decline as man started to belligerently hunt and kill them. So why is it that, once again, the Discovery Channel is helping to perpetuate the ridiculous idea that sharks are savage, cold-blooded killers with scaremongering “mockumentaries” during their famous Shark Week? Shouldn’t this week be about dispelling myths about sharks, not creating new ones?

Last year, Shark Week featured a program called Megalodon: The Monster Shark Lives which suggested that a massive, evil, 35-foot shark had terrorized a coast off of South Africa. To the untrained eye, the program could have seemed legitimate. After all, it featured “real scientists” (at least some of them turned out to be actors) and footage (that was doctored). A disclaimer was also flashed at the bottom stating that the program was fictional, but no one seemed to notice. While it’s difficult to prove something doesn’t exist, a vast amount of evidence suggests that Megalodons are extinct. We personally at IFLS received thousands of emails and comments from people who believed this mockumentary was factual.

This year, obviously out of ideas and scraping the barrel, Discovery Channel decided to recycle the same story into a new documentary (mockumentary) called Darkness: Wrath of Submarine. Once again, it featured a vicious 35-foot great white shark (called submarine) that had attacked along the same coast as the shark in the aforementioned documentary. There was a disclaimer stating its existence is “controversial” (meaning, nonexistent), but not everyone notices these.

The program involved fake institutions and actors as before, one of whom described the shark as a “cunning” beast with an “insatiable appetite for human blood.” This is utterly ridiculous. Great white sharks actually rarely attack humans and, contrary to popular belief, they don’t like the taste of human flesh. It is irresponsible to paint this image of great whites; they’re sophisticated apex predators, not mindless man eaters, and it could once again damage this already fragile species.

It doesn’t end there. Some of the ridiculous documentaries in Shark Week actually feature real shark scientists, but it turns out the Discovery Channel has been misleading them and heavily editing what they say to suit the content of the program.

For example, this year a documentary called Monster Hammerhead apparently set out to explore a legendary hammerhead that has been patrolling Florida for 60 years. For starters, hammerheads live a maximum of 44 years. Second, according to io9, the Postdoc that featured in the program, Kristine Stump, was led to believe the program was about something else.

This isn’t the first time Discovery Channel has done this. Last year they played the same trick on scientist Jonathan Davis. Davis was led to believe that the producers were interested in his bull shark research, but he ended up in a documentary called Voodoo Shark which was about a mythical monster shark called “Rooken.” Davis answered questions about unrelated things and the crew cleverly edited what he said to make it look like he was discussing and actively seeking the voodoo shark. Of course, editing is standard practice, but if you’re worried that real scientists won’t appear in the documentary because of its ridiculous nature, then maybe you should have a re-think.

The Discovery Channel claims that it is increasing public interest in sharks, which is a good thing. While that may be true- there’s so much factual, fascinating information outt here about sharks that there’s no need to sensationalize in order to interest people. Sharks are fucking awesome, so stop lying about them.