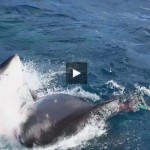 Shark Vs Shark: Giant Great White Attacks Another Great White
SUBSCRIBE: http://bit.ly/Oc61Hj
We upload a new incredible video every weekday. Subscribe to our YouTube channel so you don’t miss out!
JAWS WARS! A VICIOUS great white shark bursts from the water to rip into another SHARK. The sensational moment was caught on camera by Adam Malski, 33, as the fish proved why it has the reputation of the ocean’s most fearsome predator. The 4.8m shark – named ‘Gilbert’ – attacked the rival fish 50 miles from Australia’s shore. The larger animal survived the encounter but the smaller shark has not been sighted since.