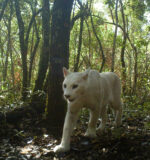 Recently, four camera trap pictures from the year 2013 have resurfaced on the interwebs, and turns out, these photos capture the first-ever confirmed case of a wild cougar with leucism. These pictures were taken in Serra dos Órgãos National Park located in southeastern Brazil’s Atlantic Forest 7 years ago using a trap camera. Then, a few years later, an article published in the “Cat News” journal confirmed that these pictures, in fact, captured the first-ever confirmed case of a wild cougar with leucism.

In case you didn’t know, leucism is an abnormal condition caused by a genetic mutation and is characterized by the partial loss of pigmentation. Animals with leucism have white, pale, or patchy coloration of the skin, hair, feathers, scales, or cuticles, but not the eyes.

In 2018, a study confirmed that these pictures capture the first-ever seen case of a leucistic puma According to National Geographic, genetic color aberrations, such as albinism and leucism, are generally pretty common among wild cats, but for mysterious reasons, they’re almost unheard of in pumas.

“That shows you how extremely unusual it is,” executive director of the Wildlife Conservation Society’s Big Cats Program Luke Hunter told National Geographic. “It’s a striking set of photos.”

After these pictures were taken, the animal was never seen again Scientists have yet to figure it out why color-changing genes are so rare among these animals. “My best guess is that the distant ancestor of pumas was uniformly colored, and that has been maintained in the species ever since. But that’s just a consequence of the randomness of mutation, the roll of the genetic dice,” Hunter told National Geographic.

Even though leucism is pretty common among wild cats, for unknown reasons, it’s almost unheard of in cougars Sadly, after the fateful encounter back in 2013, the animal hasn’t been seen ever again. “The camera trap monitoring project restarted last year, but we still have no new record of this animal or any other odd-colored pumas,” Cecília Cronemberger de Faria, an environmental analyst for the national park where the cat was sighted, shared with National Geographic.