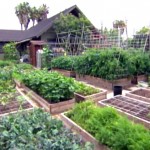 Think you can’t grow much food in an urban area? Think again. One family’s 4,000 square foot farm in Pasadena, California “not only feeds a family but revolutionizes the idea of what can be done in a very unlikely place—the middle of a city.” KCET reporter Val Zavala gives us a glimpse into the Dervaes family’s Path to Freedom Urban Homestead. “I brought the country to the city rather than having to go out to the country,” said Jules Dervaes, who created the farm with his three adult children, Justin, Anais and Jordanne. This urban homestead produces 6,000 pounds of food a year.

They grow almost all of the food they need. Ninety percent of their all-organic, vegetarian dietcomes from their garden. The operation involves 400 varieties of vegetables, fruits and edible flowers, which is 6,000 pounds of food a year. They raise eight chickens, four ducks and two goats, which provide them with eggs and milk. Chefs from high-end restaurants come directly to their house to buy their excess.

When asked if he had any doubts in the beginning, Jules admits he did. “I kept thinking this place was too small. There’s no way that we are going to be able to feed ourselves, plus I never thought we’d be able to grow the vegetables for the market,” he said. Dervaes decided to embark on this endeavor because he was concerned about what was in his and his children’s food. He wanted them to eat organic, GMO-free food, and he knew the best way to ensure that was to grow it himself.
Read: Grow Food Year Round With Radically Sustainable Passive Solar Greenhouse The Dervaes’ say they love their homesteading lifestyle and couldn’t imagine it any other way.

The family has a solar panel on the roof that provides all of their electricity. Not that they use much. Most of their “gizmos,” says Anais, “are hand-powered” like their hand-crank smoothie maker. That puts their electricity bill at about $12 per month. Their car runs on biodiesel, which they make from vegetable waste that restaurants drop off at their house for free. These people have all the hook ups.

But it’s not all sunshine and flowers (though they have plenty of both). The Dervaes’ work very hard, make roughly $20,000 a year and have to deal with weather-related disasters, pests, disease and now climate change. Justin said, “we’ve been gardening so long that you can sense things are off. We have this little bug, the Junebug, that comes out in June, but now it doesn’t come out until July, August and September—so something is off.” Water is also a serious issue. With the drought in California, Jules has relied on clay pot irrigation, an ancient form of irrigation, to conserve water.
Read: Build a $300 underground greenhouse for year-round gardening (Video) All that hard work is well worth it when the family sits down to enjoy the fruits of their labor.
By growing all of their food themselves, except staples such as wheat, rice and oats, they are able to eat fresh and delicious, organic food for $2 a day per person. They have attracted a lot of attention since they began homesteading in the mid 1980s. Many homesteaders have emulated their model. They offer workshops and events on their farm, and they even have a blog. They are proof of the bounty you can grow on one-tenth of an acre.

Watch here as KCET’s Zavala reports on this revolutionary family: