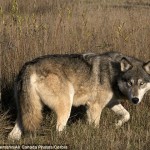 An animal shot dead by a coyote hunter in Iowa in February was the first gray wolf spotted in the state since at least 1925, DNA testing has confirmed.
The hunter, who hasn’t been named, shot the female wolf near Fairbank in northwest Buchanan County believing it to be a similar-looking coyote. It is legal to shoot coyote in Iowa, though hunting wolves is illegal as they are a protected species.
On closer inspection, the hunter thought the supposed coyote may have been a wolf and brought the animal to the DNR office in Manchester, where biologists examined it and took DNA samples. Gray wolf: An animal shot dead by a coyote hunter in Iowa in February was the first gray wolf spotted in the state since at least 1925, DNA testing has confirmed. This image shows the same species in Minnesota in 2011
Iowa previously had two sub species of gray wolf – the Great Plains wolf and the gray timber wolf.
But they were systematically killed or driven out of the state by Iowa settlers who considered them a threat to their livestock.

According to the 2012 wolf status report, a reliable researcher concluded that Iowa’s last valid wolf record occurred in Butler County in the winter of 1884-1885.
However, a timber wolf was shot in Shelby County in 1925, though it’s not clear if it was wild or had escaped captivity.
‘I was surprised but not that surprised,’ DNR furbearer specialist Vince Evelsizer told The Gazette, describing his reaction to the news given the fact Wisconsin and Minnesota each have substantial wolf populations. Similar: The hunter shot the wolf believing it to be a similar-looking coyote. A gray wolf is pictured left alongside a howling coyote, right

‘Large animals can cover great distances, and state lines mean nothing to them,’ he said.
The hunter was not cited, DNR Conservation Officer Scott Kinseth said, as they believed the shooting was a genuine mistake.
Kinseth said the hunter was extremely cooperative and had no idea he was doing anything morally or legally wrong.
But he warned hunters in future to think before they shoot.
‘They are protected animals. We know they are here. Make sure of your target. If in doubt, don’t shoot,’ he told The Gazette.
The wolf was a healthy female weighing between 65 and 70 pounds.
This is normal size for wolves in neighboring states but about twice as heavy as the average coyote.