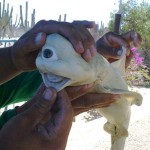 The 22-inch-long (56-centimeter-long) fetus has a single, functioning eye at the front of its head—the hallmark of a congenital condition called cyclopia, which occurs in several animal species, including humans.

Earlier this year fisher Enrique Lucero León legally caught a pregnant dusky shark near Cerralvo Island (see map) in the Gulf of California. When León cut open his catch, he found the odd-looking male embryo along with its nine normal siblings. “He said, That’s incredible—wow,” said biologist Felipe Galván-Magaña, of the Interdisciplinary Center of Marine Sciences in La Paz, Mexico.

Once Galván-Magaña and colleague Marcela Bejarano-Álvarez heard about the discovery—which was put on Facebook—the team got León’s permission to borrow the shark for research. The scientists then x-rayed the fetus and reviewed previous research on cyclopia in other species to confirm that the find is indeed a cyclops shark.

Cyclops sharks have been documented by scientists a few times before, also as embryos, said Jim Gelsleichter, a shark biologist at the University of North Florida in Jacksonville. The fact that none have been caught outside the womb suggests cyclops sharks don’t survive long in the wild.

Overall, finding such an unusual animal reinforces that scientists still have a lot to learn, Gelsleichter added. The Eye Has It
Photograph courtesy Marcela Bejarano-Álvarez

The cyclops shark also has other deformities, including albinism, or a total lack of tissue pigments; no nostrils; a bump on its snout; and a spinal abnormality, according to Galván-Magaña. (See more pictures of albino animals.)

A mother’s poor diet—especially a lack of vitamin A—can cause cyclopia in mammals, including people, but it’s difficult to determine the cause of the condition in sharks, he said.

Even so, Galván-Magaña suspects the defects in this case aren’t related to pollution. “The fishing area close to Baja California Sur is clear of pollution, is a pristine zone, and we cannot consider it as a cause for abnormalities in dusky sharks,” according to the study. The baby’s stark white color would’ve made it more obvious to predators, and its malformed tail would’ve hindered swimming.

Aside from the handful of deformities, “the rest of the body was apparently normal,” with well-formed fins, according to the scientists’ study, which has been submitted for publication. The cyclops shark is pictured next to one of its siblings, which is normally colored, with a blue-gray back and white underside.

Dusky sharks, which average about 10 feet (3 meters) long as adults, are among the slowest growing of the shark species and can live for up to 45 years.

Often illegally harvested for its fins, the shark species is considered vulnerable by the International Union for Conservation of Nature. Above, the albino cyclops shark lies among other captured sharks. In addition to the one eye, albinism is a rare condition among sharks, occurring more often in bony fishes, Galván-Magaña said.

There are no previous known cases of albino dusky sharks, “so this report is considered a first record of this malformation for this shark species in Mexico,” according to the study.