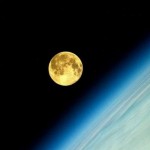 The world waits for it to get closer every single year and it is truly a sight to behold, and that is indeed the fantastic Supermoon. Now, the time has come for Supermoon 2014, and sky-watchers need to know the best ways to view the moon and make sure they are ready for the best times to be outside and get a glimpse of it. On Aug. 9, 2014, the Independent revealed some of the info you need to know. For those not aware, Supermoon 2014 on Sunday, Aug. 10, 2014, will mark the closest the moon has been to the earth in more than 20 years. Those looking at the night sky will see a moon 14 percent bigger and 30 percent brighter than normal. The Washington Post gave some great tips on the best ways to view Supermoon 2014 so you get a good look and some awesome pics. Fireworks streak past in front of the supermoon outside the town of Mosta, celebrating the feast of its patron saint, in central Malta

~ One of the best things about the Supermoon is that “light pollution” won’t block the view of it. That can often times have an effect on seeing stars and other cool night events, but it won’t hurt the view of the moon.

~ Hopefully, you’ll have a clear sky because clouds can block it. If you’re hoping to see the Supermoon, but see that it’s turning into a cloudy evening, you may want to find another location.

~ Head outside right at moonrise when there is less of a chance of cloud cover. NASA Goddard space scientist Shawn Domagal-Goldman says “It’s going to look biggest and brightest to us when it’s right next to the horizon.” The supermoon appeared almost pink in colour as it glowed above Istanbul in Turkey. Supermoons, which are known to cause higher tides, occur every 13 months and 18 days, but are not always noticed because of cloudy weather

To check out when moonrise is for you, click this link.

~ Avoid areas with severe amounts of trees and buildings. Sure, you should still be able to see the Supermoon at some point, but it’s better if there aren’t a lot of things blocking your line of sight.

A Supermoon did happen back in mid-July and another is set for Sept. 9, 2014, but not like this one. Having three Supermoon occurrences this close to one another is rare, and likely won’t happen again until 2034.