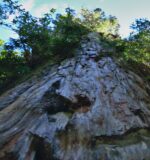 Chilean scientists have identified a four-metre-thick Patagonian cypress known as the Great-Grandfather to be the world’s oldest living tree, beating the current record-holder by over 600 years.

In a study of the coniferous tree, also known as Alerce Milenario in Spanish, Jonathan Barichivich, a Chilean scientist at the Climate and Environmental Sciences Laboratory in Paris, found that the tree could be as old as 5,484 years, at least 600 years older than the former contender. According to The Guardian, Maisa Rojas, Chile’s environment minister and a member of the UN Intergovernmental Panel on Climate Change, called the news a “marvellous scientific discovery”.

Known in Spanish as the alerce, Patagonian cypress (Fitzroya cupressoides) is a tree native to Chile and Argentina, belonging to the same family as giant redwoods.

Barichivich took a sample of the Great-Grandfather in 2020, but could not get to its core with the drill he used. He then used computer models to determine the age of the tree, taking into account environmental factors and random variations.

As he has not yet been able to fully count the year rings of the tree, Barichivich has not yet published an estimate of the age of the tree in a scientific journal, but as he has indicated, he is hoping to make up for it in the coming months.

If the results are confirmed, Alerce Milenario would be 600 years older than the 4,853-year-old smooth pine known as Methuselah in California, which is currently considered to be the world’s oldest tree.

Great-Grandfather lives in the cool, humid environment of Alerce Costero National Park, and its fissures provide shelter for mosses, lichens and other plants.

According to Barichivich, the tree is threatened by visitors to the park being able to walk around its trunk, as well as droughts caused by global warming.

According to Chile’s forestry institute, logging plantations in the south of the country cover more than 2.3m hectares, as cellulose production is a major industry for the country.

While water-thirsty non-native pine and eucalyptus plantations make up 93% of this total area, over 780,000 hectares of native forest were lost in Chile between 1973 and 2011.

We can only hope that Great-Grandfather and its counterparts in the wilderness will survive human activity.