Obesity Problem Answer Might Be in the Bugs in Our Stomachs 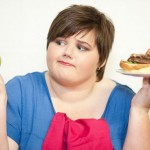 A young woman chooses between an apple and a burger in this undated file photo. Getty Images

Scientists conducting a series of experiments in Sweden over the past five years have made a discovery that could make a profound contribution to the fight against global obesity.

The scientists, led by Fredrik Backhed of the University of Gothenburg, were studying mice that had been raised in a germ-free environment, and were thus lean and healthy. But when they were fed a “fecal pellet,” which is just what it sounds like, from an obese human the mice quickly became obese, although exercise and their food availability remained unchanged.

All it took was a dose of microbes from the gut of an overweight human to make the mice prefer the fattier and sweeter morsels over the healthier foods.

After analyzing that, and numerous other recent experiments, scientists from three universities have made a bold proposal:

The single-celled organisms that live in our guts and help us digest our food and fight off diseases may have ulterior motives. Maybe they want to be in charge.

Not just of our gastrointestinal track. They want control of our diets, even if that makes us fat and unhealthy, they want to move our lives in directions that are good for them even if bad for us, and they may even want to take over our brains.

In fact, they may have already done that.

How the Cuckoo Wages an ‘Evolutionary Arms Race’

How the Clever Hummingbird Tortures Scientists

How The Naked Mole Rat Could Help You Live Longer

Is it possible that the bacteria we depend on in the symbiotic relationship between us and them are clever enough to make us love the taste of seaweed?

“That’s the science fiction part of this,” evolutionary biologist and psychologist Athena Aktipis said in a telephone interview. “But I think it’s really compelling.”

Aktipis, who is now with Arizona State University, began an intriguing research project while she was at the University of California, San Francisco.

Joined by colleagues Carlo C. Maley of UCSF and Joe Alcock of the University of New Mexico, Albuquerque, the trio set out to see if evidence in the scientific literature supports the idea that our bodies may indeed be at war with our own guts, even over control of our brains, and whether that would partly explain the obesity epidemic that is sweeping much of the world.

This is new stuff. We’ve known for many years that we have good bacteria and bad bacteria in our guts, some helping and some hurting as we move through life, but recently experts have begun wondering if that’s all there is to it.

Does some of that bacteria in your gut fight to serve its own agenda to meet its own needs, not those of their host — which is you?

How could something that small be a threat? They may be tiny, but your gut is home to trillions. You are one individual, and their genes outnumber yours 100 to one.

They have access to the vagus nerve, which connects 100 million nerve cells in the gut to the base of the brain. They can influence our sense of taste, they can produce toxins to make us feel bad, and they can put is in a good mood, wanting more of whatever they need for themselves.

The researchers have put together a plausible argument, published in the journal BioEssays, suggesting that’s exactly what’s happening, even if it sounds like science fiction.

But they also argue that we could turn this thing around and put ourselves back in total control, curing illnesses and making us much healthier along the way.