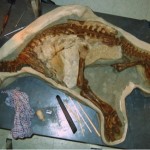 It’s a pretty rare event to find complete fossils in good condition. After millions of years any number of things could happen to destroy fossils before they are discovered and documented by scientists, if the animal even fossilizes at all. Finding well preserved baby animals is particularly hard, since they are more likely to have gotten trampled or eaten after their death. Phillip Currie from the University of Alberta has recently uncovered a juvenile Chasmosaurus belli that was so complete and intact, he was actually able to speculate about the cause of death.

Chasmosaurus belli is commonly found in British Columbia, Canada. It is a relative of the triceratops and has the familiar ornamental frill. Up to this point, all of the skeletons have been adults. Random bones of smaller dinosaurs have been discovered, but lacked the context of a full animal. The discovery of the 70-million-year-old juvenile, which was only about three years old at the time of death, reveals important clues about how the dinosaur grew and changed over the course of its life. As it turns out, the young C. bellis look a lot like the adults, just smaller. The newly-discovered young dino was about three years old at the time of its death, measuring about 5 feet (1.5 meters) long. Adults grew to be about 15 feet (5 meters) long, though the body plan is essentially unchanged. Other baby dinosaurs have proportionally longer legs to keep up with quick-moving adults, but that does not seem to be the case with this species.

The fossil was found in what used to be a riverbed. This has led Currie and his research team to believe that the baby didn’t die at the hands of a larger creature. It most likely wandered out too far into the water and got caught in the current. Unable to save itself, it drowned and settled at the bottom of the river, where it would eventually become fossilized in the sediment. The body was so well preserved, Currie was actually able to see impressions from the baby’s skin in the surrounding rock. The team hopes to use this fossil to gain a deeper understanding of how C. belli lived and how it existed in the context of its ecosystem.