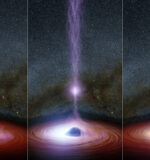 Then an enormous pulse of X-ray energy spewed out. This kind of phenomena has never been observed before. “This is the first time we have been able to link the launching of the corona to a flare. This will help us comprehend how supermassive black holes power some of the brightest objects in the cosmos.” Dan Wilkins, of Saint Mary’s University, said. This is one of the most important discoveries so far.

NuSTAR’s principal investigator, Fiona Harrison, noted that the nature of the energetic source was “enigmatic,” but added that the capability to in fact record the event should have provided some clues about the black hole’s size and structure, along with (hopefully) some fresh info on how black holes work. Fortunately for us, this black hole is still 324 million light-years away. So, no matter what bizarre things it was doing, it shouldn’t had any effect on our corner of the cosmos. While we like to think we have a fairly good understanding of space, much of what we count as knowledge is just theory which has yet to be disproved. So it looks like some textbooks will need to be rewritten. And while this particular supermassive black hole is 324 million light-years away, I’m not taking any chances.