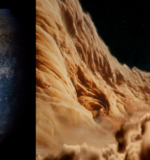 Juno is a NASA space probe that orbits Jupiter. Lockheed Martin built it, and NASA’s Jet Propulsion Laboratory operates it. As part of the New Frontiers programme, the spacecraft was launched from Cape Canaveral Air Force Station on August 5, 2011 UTC.

NASA’s $1 billion Juno spacecraft captured spectacular flyby photographs while traveling at more than 130,000 kilometres per hour above Jupiter. You can see these amazing images below: