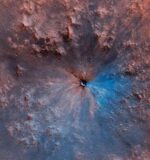 A major new study published Monday by the journal Nature Astronomy indicates that a subterranean reservoir of extremely salty water is located close to the Martian south pole. For scientists, the existence of such a lake – along with a number of other wet areas – is a tell-tale sign that the planet could harbor its own native microscopic life, given the importance of liquid water to survival. While some researchers still remain unconvinced that liquid water exists on Mars, the new study lends credibility to the belief that the Mars Express robot orbiter made the discovery, according to tentative findings from 2018 during the mission to radar map the planet’s crust.

The research gleaned from those findings found that an underground “lake” of liquid water lies beneath layers of sediment close to the planet’s south pole, similar to the subglacial lakes that exist underneath Greenland and Antarctica’s ice sheets here on Earth.

The 2018 study was hailed as a huge breakthrough in the search for alien life in our universe, in general, and on Mars, specifically, but skeptics continued to question whether scientists had actually accumulated enough details to know with certainty that they had actually found a vast lake of liquid water.

However, this latest study used the techniques used by the satellites orbiting our own planet to study the massive subterranean lakes underneath Antarctic glaciers to confirm that the vast store of liquid does exist on Mars, and spans about 15 miles across.

Earth’s own subglacial lakes thrive with bacterial life, leading scientists to believe that their Martian counterparts could also be teeming with microscopic activity.

“We are much more confident now,” said Elena Pettinelli, a geophysics professor at Italy’s Roma Tre University, who led the research on this and the previous study. “We did many more observations, and we processed the data completely differently.”

The researchers were also able to use the method to locate a patchwork of other buried reservoirs in the region, separated from the main reservoir.

Researchers still don’t know precisely how deep the reservoirs go, but they are located a bit more than a mile below the surface.

The data also shows that the bodies are likely filled with hypersaline solutions, or water that is so saturated with a thick concentrate of calcium, magnesium, sodium and potassium that they are able to remain liquid despite the extremely cold conditions on the Martian south pole.

If these pools are filled with liquid water, they are a likely venue for microbial alien life – which itself could be the remnant of life that may have existed billions of years ago on the planet if Mars had the sort of oceanic expanses of water on its surface that the Earth does.

If the discovery is confirmed, this will be the very first time that liquid water will have been found on Mars.